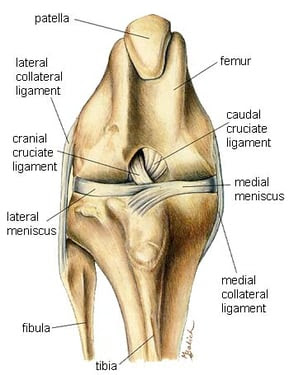 A torn CCL in dogs may seem to come on suddenly, but in most cases the ligament has been weakening for months. Once limping is observed, pet parents tend to notice a pattern of chronic intermittent lameness lasting for 48 to 72 hours. The limping can be severe or mild.

Here are additional signs that your dog might have a torn Cranial Cruciate Ligament (CCL):

Some of these signs can be very subtle to nonexistent. Overt pain is not a common sign of a torn CCL. While the knee may be uncomfortable to move, lameness may be due to instability rather than discomfort.

While every case is unique, most of the patients that undergo TTA Surgery here at Vet Playas Veterinary Hospital are able to walk out of the hospital the same day of surgery. A limp will still be present, but the vast majority are at least toe touching. At time of your pet’s discharge from Vet Playas Veterinary Hospital, we supply you with detailed TTA Surgery recovery and rehabilitation instructions. If at any point during the post-operative recovery and rehabilitation process you have any questions or concerns, we will be available to you. We are very responsive to all of our clients, and motivated to resolve any concerns you have regarding your pet’s recovery, as we are fully aware that great outcomes have everything to do with attentive follow-up.

** Included in the price of TTA Surgery is post-surgery care. The staples or stitches to be removed 10 to 14 days after surgery and a 1 month follow up examination with X-Ray(s).

Tibial Tuberosity Advancement (TTA) vs Tibial Plateau Leveling Osteotomy (TPLO)
As per the American College of Veterinary Surgeons (ACVS). “The decision between TTA and TPLO is based purely on the opinion of your surgeon and their personal technical experience. To date, no published data supports one technique being superior to the other.” Here at Vet Playas Veterinary Hospital, we offer TTA Surgery because it has been shown that the patient has a quicker return to function and recovery time is shorter.
https://www.acvs.org/small-animal/cranial-cruciate-ligament-disease

We know that getting back into fitness is tough! Let us help you achieve your weight boxing workouts.